Book: How Bad Are Bananas?

How Bad Are Bananas?: The Carbon Footprint of Everything by Mike Berners-Lee 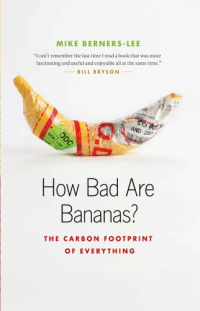 The publisher's description of this book is:

From a text message to a war, from a Valentine's rose to a flight or even having a child, How Bad are Bananas? gives us the carbon answers we need and provides plenty of revelations. By talking through a hundred or so items, Mike Berners-Lee sets out to give us a carbon instinct for the footprint of literally anything we do, buy and think about. He helps us pick our battles by laying out the orders of magnitude. The book ranges from the everyday (foods, books, plastic bags, bikes, flights, baths - ) and the global (deforestation, data centres, rice production, the World Cup, volcanoes, - ) Be warned, some of the things you thought you knew about green living may be about to be turned on their head. Never preachy but packed full of information and always entertaining.

In this book we learn about the carbon footprint of many different things, not too many of which are directly related to the bar world but enough are that it might get us thinking differently about certain items.

For example, bananas - though they're sent from where they're grown to points around the world, they're typically sent on ships (1 percent as bad as flying) rather than airplanes, they don't require packaging as they're self-contained, and they last a long time. So bananas are relatively low-impact!

Other relevant bits of info from the book:

Those are the relevant tips to the industry but overall the book seeks to have us look at the relative impact of using a hand dryer versus getting on a flight, rather than if lemons are better than grapefruits for the environment.

Purchase the book on Amazon or order from your local bookstore.