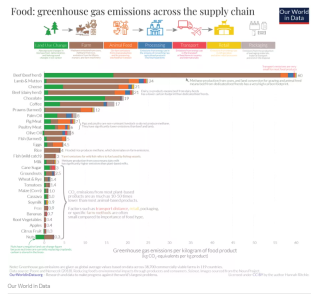 In the cocktail bar setting it would not be normal to choose between beef or peas for a cocktail ingredient, but still there are some facts to learn from this story on Vox.com called "How to reduce your food’s carbon footprint, in 2 charts."

Visit the link to see (and blow up) a chart that compares for many foods the land use, transport, packaging, and other factors of foods' carbon impact. It's very interesting.

The story's subtitle declares that transportation costs of shipping foods to consumers is not a significant factor compared to whether those foods are animal-based (a lot of CO2 emissions from land use, farming, animal feed) versus plant-based. "The distance our food travels to get to us actually accounts for less than 10 percent of most food products’ carbon footprint."

But in the bar setting, really the only animal products we're worried about are eggs used to make frothy cocktails, and maybe a bit of milk. If we compared one plant vs another this chart may reveal more useful differences compared to each other rather than vs meat. But still we can learn from it.

Posted at 09:00 AM in chocolate, coffee, transportation costs | Permalink