In many online recipes for candied citrus peels, the directions include blanching the citrus in boiling and then freezing water several times in order to "reduce bitterness and retain color."

I wondered if the color-retaining properties would carry over to dehydrated citrus wheels, which are a popular way to garnish cocktails with less waste than fresh citrus wheels - as leftover wheels and partially-cut citrus would be discarded at the end of each night. Dehydrated citrus wheels often turn brown and don't taste good, so I was seeking ways to improve them. 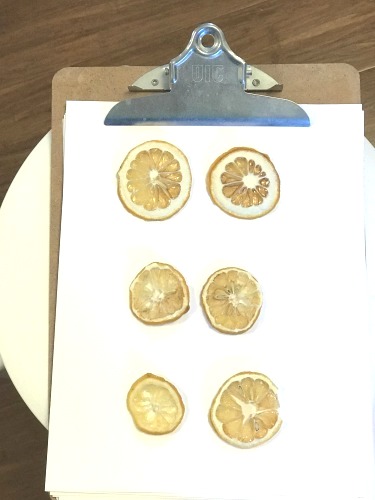 For blanching, I plunged lemon wheels into boiling water for less than a minute, then into ice water. I repeated this about 6 times.

For the sugar-brushed wheels, I took the blanched wheels and just brushed them with syrup.

I dehydrated all of these in a cheap counter top dehydrator for several hours.

The picture is pretty terrible, but the conclusion was that the unblanched lemon wheels looked better than the blanched ones - the browning on the outside peel was about the same on both. And due to the blanching process that's somewhat harsh on the lemons, the interior of the blanched lemons was in pretty bad shape.

So I don't think the blanching was helpful for color retention. The sugar-coated blanched lemon wheel was in pretty good shape, though not significantly lighter in color. So far, blanching was not worth the effort.

If I were to repeat this experiment  I would make thicker slices before blanching.

I also decided to try candied wheels. Most recipes for candied lemon peels involve using the pith as well as the peel, cut into thick strips. You blanch the strips several times to remove the bitterness of the pith, and then simmer them in simple syrup for 20 minutes up to an hour. Then rather than dehydrating them, you leave them to cool on a rack.

I did this blanching and cooking in syrup with lemon wheels. Apologies for another terrible picture. 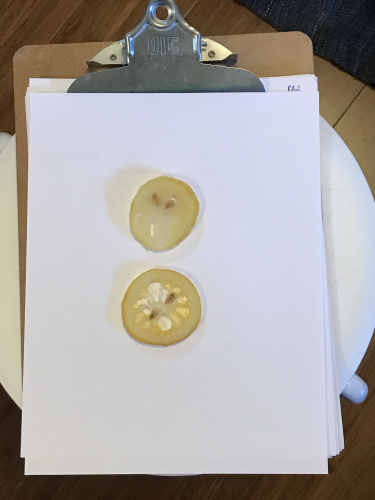 After blanching about 6 times and simmering in syrup for about 45 minutes, I left the lemon peels on a rack to dry. I coated the top one in the picture in sugar crystals, as is usually done with candied lemon peels. I would say it detracted for the attractiveness of the candied lemon wheel rather than added to it.

Blanching does not seem to improve the look of dehydrated lemon wheels.

However, blanching and then candying the wheels makes really attractive lemon wheels. These might be slightly challenging to store since they remain a bit sticky after drying.

The question then is: Do we want a sugar-coated garnish on cocktails, even if they are edible?

Posted at 10:19 AM in citrus, experiments, garnish | Permalink