Many bars choose to use dehydrated citrus wheels instead of fresh ones to use as garnish in cocktails. As drying out the citrus preserves the wheels, there is no waste at the end of the night.

However, some customers do not enjoy the look of ones that are toasted to a brown color. I decided to try my hand at dehydrating/preserving some lime wheels in various ways to see if I could make them retain a lively bright green color while preserving them. (Spoiler: I have not succeeded.)

My home dehydrator has only one setting, and it seems pretty hot as all my wheels turn brown pretty fast. Others allow for precise temperature control and/or several temperature settings. To prevent citrus wheels from turning dark brown, some bartenders have had success with a "slow and low" approach.

In my first attempt with the equipment that I have at home, I compared dehydrated lemon wheels to lemon wheels that were blanched a few times in boiling then ice water (as is done in making candied citrus snacks), and then dehydrating them in a countertop food dehydrator. My conclusions from that were:

Blanching does not seem to improve the look of dehydrated lemon wheels.

However, blanching and then candying the wheels makes really attractive lemon wheels. These might be slightly challenging to store since they remain a bit sticky after drying. Also they will add sugar to a cocktail. 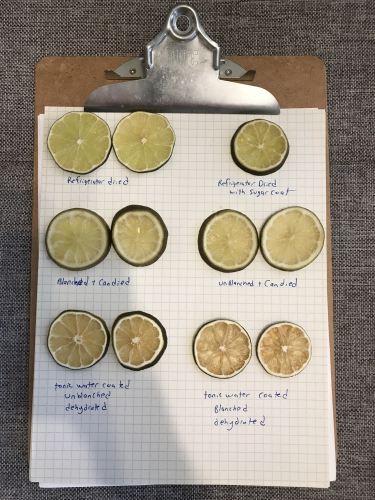 I was searching through the website of Karen Solomon, author of Jam It, Pickle It, Cure It and Other Kitchen Projects among other books. On her blog post, "Top 5 Tips for Successful Oven Drying: Why You Don’t Need a Dehydrator" she noted, "The biggest dehydrator in the world is already running 24 hours a day. Your refrigerator is a master of dehydrating, albeit slowly, and it’s a great resource for sucking out moisture from anything."

So I simply sliced some limes and tossed them in the fridge. One of them I coated with simple syrup first, but this didn't make much of a noticeable difference.

The limes dehydrated very nicely after 2 days in the refrigerator. I pulled them out and put them in a plastic covered dish afterward and they look the same. (These are not 100% dry, but they look really good and don't seem to be drying more.)

The outside peels of the limes are pretty dark though, with dark brown spots that I don't think were there when they went into the refrigerator. So despite the "meat" of the wheel looking pretty great, if I saw one of these floating in my drink I would know it was a pretty darn old lime wheel. 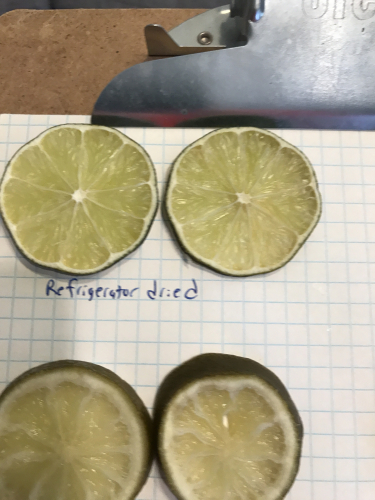 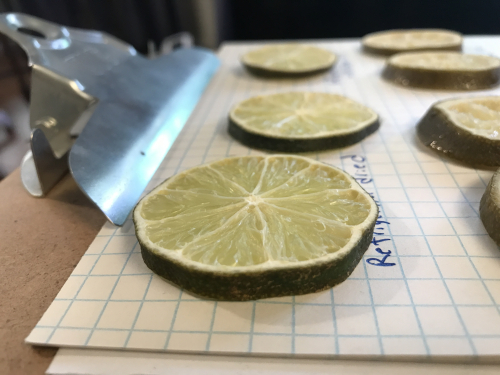 Julian de Féral suggested that lime wheels could be coated with leftover tonic water, because not only does it have some sugar in it, it has citric acid also. Citric acid is often used to prevent browning on fruits like cut apples.

The tonic water didn't seem to make a difference to the color of the outside lime peel. The blanching process also doesn't make a lot of difference (at least when I repeat blanch it - someone suggested that my 4-6 time blanching was excessive) to the peel. Nor did its sugar seem to have much impact - these looked more or less like regular dehydrated lime wheels, blanched or not. 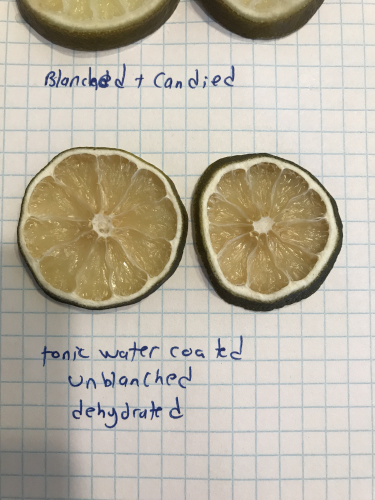 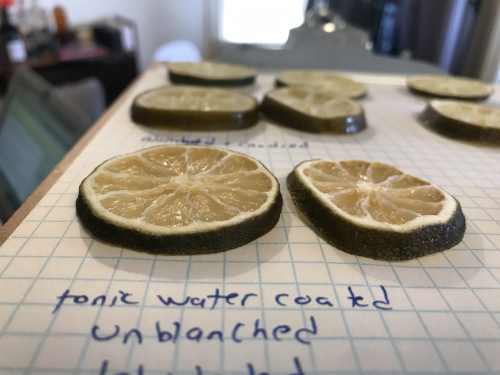 Both blanched and unblanched lime wheels were then candied - dipped into lightly bubbling syrup for nearly an hour. Neither looked great at the end, though the blanched ones taste MUCH better than the unblanched - blanching is supposed to remove the bitterness of the pith and it works. Perhaps if they were coated with powdered sugar after they would look better, but this experiment is more about making bright garnishes than candy. 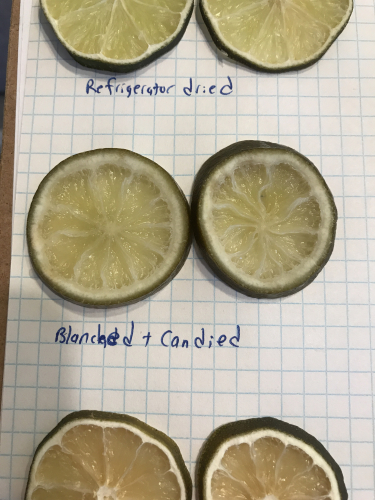 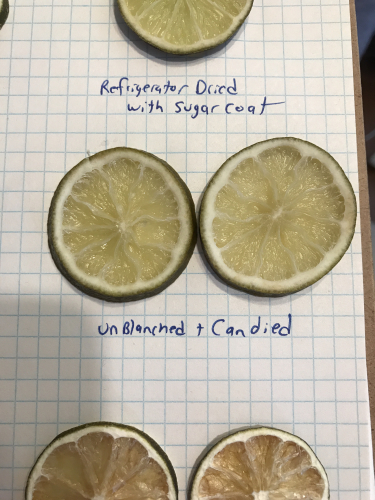 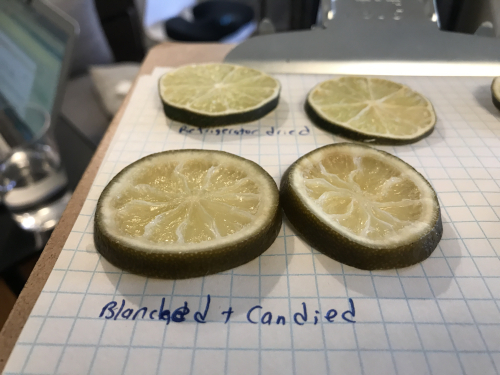 Conclusions and Next Steps: