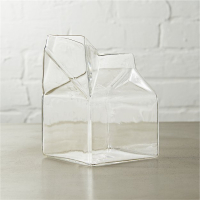 Milk clarification is a cocktail technique in which an acidic ingredient is used to curdle milk, separating it into curds and whey. The curd clumps act as filters that trap particulates, so that when a cloudy liquid is poured through them (such as a cocktail with lime juice that curdled the milk) it comes out clear. The curds stay behind and the whey goes into the clarified cocktail.

This technique is used to make Milk Punch (aka Clarified Milk Punch or British Milk Punch). However beyond making tasty drinks, the clarification process acts as a preservative - the cocktail can now be stored at cellar temperature for months or longer - and also if shaken in a cocktail shaker it tends to make drinks frothy (though I think not for long).

The clarification and the froth-production in the technique make it useful in many different ways, as have come to light when I've been interviewing bartenders for CocktailGreen. Here are some of the ways the technique is useful:

Preservation of Whole Cocktails and of Just the Citrus

Use the Curds Too