Daren Swisher, co-owner of the forthcoming Daiquiris & Daisies, a "cocktail bar in a food hall, in the Financial District in Boston that might open soon" replied on Twitter to the post about Freezing and Thawing Citrus Ends in an Attempt to Make Oleo Saccharum.

The post was about a (failed) attempt to make easy oleo saccharum from the ends of citrus fruit by freezing and thawing it to break the pockets of oil in the peels. It didn't work.

Swisher replied, "I’ve done a similar thing, but with unfrozen ends and shells, I beat them up in a stand mixer with the sugar for a few minutes (paddle attachment) then let it sit for a while, got good oil extraction."

He continued, "Basically letting the mixer muddle for you. Scoring the citrus scraps [before adding to the mixer] helps not jam the paddle up. I use the lowest/2nd lowest speed setting to get a little bit of that crush & press action w/o beating it to hell."

The stand mixer and attachment are shown below. 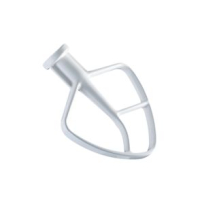 Posted at 09:17 AM in citrus, oleo saccharum | Permalink