Sodium Metabisulfite and Ascorbic Acid to Prevent Browning and Oxidation

I recently attended an online talk by Luis Hernandez of Cocktail Illustrators. Hernandez is one of the leading bar experts in using various alternative acids to replace citrus in cocktails. Here's an older story on some ways that he does this.

One new tip I picked up in the talk (I'd link to it if I could remember where it was) is another way to prevent browning in cocktail ingredients.

When ingredients that turn brown after cutting, such as avocados, apples, celery, avocados, and other cut fruit, they can either be preserved to prevent discoloration and oxidation, or discarded.

When a prepared salad has cut apples in it, for example, those apple slices have typically been dipped in something like ascorbic acid or just lemon/lime juice to keep them bright instead of turning brown.

Bartenders often use ascorbic acid in particular to preserve the color in ingredients, including syrups and things meant to store and last a long time. 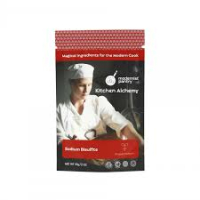 Hernandez in his talk mentioned that sodium metabisulfite  (also known as Sodium Bisulfite) at a .1 percent concentration is a great, or better ingredient for preventing browning. It is also used industrially in citrus preservation and in seafood preservation to retain color.

In a later online talk I attended by sciencey bartender Dorothy Elizabeth, she echoed using this ingredient and that she had also learned this tip from Luis Hernandez.

A very important note:  This chemical is also used in non-food industrial applications, so if you decide to use it for food and beverages be sure to purchase a food grade version.

This video on Modernist Pantry covers sodium bisulfite and ascorbic acid. Unfortunately it doesn't cover why or when to use one over the other. However, in another place on their site, they state:

One thing to note is that ascorbic acid is acidic and will make food sour. Ascorbic acid should be used in a ratio of 0.5% of the total weight of the recipe. The better option is to eliminate the cause of the oxidation all together. Sodium bisulfite when added to water creates sulfur dioxide, sulfur dioxide then inactivates the enzyme phenolase all together. The best ratio for sodium bisulfite is 0.1% of the total weight of the recipe. Never use sodium bisulfite in a ratio higher than 1.25% as it could cause an allergic reaction.

Posted at 08:09 AM in citrus, isolated acids, jam/jelly/marmalade, preservation | Permalink