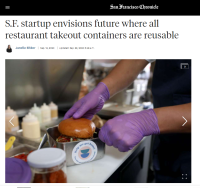 Here's a round-up of sustainability news catered to the cocktail audience.

“Sustainability has always been part of Bar Trigona. From the beginning, we’ve tried to be as sustainable and environmentally friendly as possible, from only using ingredients produced locally, to reducing packaging and waste at the bar, ” says head bartender Ashish Sharma.

The new menu, titled The Life Cycle Of Fruit, focuses on how you can reduce, reuse and think differently about fruit. The drinks revolve around four fruits – mango, jackfruit, mandarin orange and watermelon – and each fruit features three cocktails and one mocktail.

There is no jackfruit “meat” or juice in the drink either. Instead, the jackfruit flavour comes from an orgeat syrup that is made by boiling jackfruit seeds and blending them together with coconut sugar. Mixed with the cocktail’s other ingredients (aged rum, triple sec, lime juice, trigona honey and milk), the jackfruit aromas come through and form a delicate balance of sweet, fruity and sour notes.

One reason why so little plastic is recycled is because it is hard to break down, and the processes typically used to remould old plastic weaken its chemical structure. As a result, recycled plastic is normally only used to make low-value products, such as outdoor benches and bins.

The researchers found that PBTL can be easily recycled by heating it at 100°C in the presence of a chemical catalyst for 24 hours. This breaks the plastic cleanly into its original building blocks, which can then be reassembled into new high-quality PBTL.

Make Your Bar More Sustainable and Profitable with Prediluted Cocktails

Prediluting cocktails means that bartenders don’t need to use ice to shake or stir a drink, resulting in reduced water waste. “Prediluting controls the exact amount of water being used to dilute the cocktail,” says Brooke Toscano, the managing partner at Pouring Ribbons in New York City. “In most cases, the cocktail is stirred or shaken with ice to reach optimal dilution and temperature, then the ice is tossed aside, letting a lot of water literally go down the drain.”

This official document with an unexciting name details ”general methods for the assessment of the ability to repair, reuse and upgrade energy-related products.” In plain English, it’s a standard for measuring how easy it is to repair stuff. It’s also a huge milestone for the fight for fair repair.

So in order to regulate repairability, we needed a universally accepted way of measuring how repairable products are. That’s what a CEN-CENELEC working group has been developing for the past three years.

One very important and often-overlooked aspect of running a zero-waste bar is community. While you may not have a use for your empty bottles, that restaurant across the street might; meanwhile, the cafe next door has a surplus of spent coffee grounds that would be perfect for the upcycled Espresso Martini recipe you’re developing.

This is exactly what Nathan Larkin had in mind when he founded the Wasteman of Manchester’s Bars Facebook group in November 2019. Larkin, the owner of Speak in Code in Manchester city centre, wanted to create a platform where local businesses could maximise the value of so-called ‘waste’ by communicating with one another – and his plans for bringing a more sustainable approach to the city’s bar community haven’t stopped there.

While the “zero waste” movement has made strides in industries around the world – either as sustainable lifestyle, ethical trend or marketing opportunity – Wasteland founder Dharath “Tot” Hoonchamlong admits that achieving absolute zero on trash is still a long ways off. Some things inevitably must be ditched and go to the landfill.

“We are not a zero-waste bar, but our efforts are directed into minimizing waste as much as we can,” Tot said.

This month, O’Neill Vintners & Distillers, the seventh largest winery in the US, unveiled BioFiltro’s largest worm powered winery wastewater system in the world, capable of filtering more than one million gallons of wastewater per day. A key component of the winery’s ongoing commitment to sustainability practices, BioFiltro’s patented Biodynamic Aerobic (BIDA®) System enables O’Neill to harness the digestive power of California red wrigglers to recycle up to 80 million gallons of water a year, equivalent to 2.7 million bathtubs or 640 million water bottles.

O’Neill’s worms will convert the nutrients from the wastewater into worm castings, a soil amendment sought after by growers for its microbial activity, nutrient levels, and ability to improve soil health.

Her company, Dispatch Goods, has gradually been bringing reusable takeout containers into restaurants since last fall. Several San Francisco restaurants, including vegetarian staple Greens, salad spot Mixt and New Orleans-style restaurant Voodoo Love, stock Dispatch’s steel-and-silicone containers, and the startup is partnering with the city of Alameda for a larger-scale pilot this fall.

“So much of the responsibility has been on the customer. A customer can’t bring their own cup and container and water bottle and bag,” she said. “It’s become more evident now than ever this is a systems problem.”

About a year ago, Dispatch teamed up with tech company Yelp to offer reusable containers at a few nearby restaurants for Yelp employees. Yelp paid for the service, and Dispatch picked up dirty containers from the office. The startup’s plan was to continue teaming up with large companies and slowly take over downtown San Francisco. But when employees stopped going into offices this spring, Hoell set her sights on people at home.

Customers can now either order food from Dispatch’s website or from participating restaurants directly — or, in the case of Square Pie Guys, also on DoorDash — and request Dispatch packaging. Either way, customers pay $1.50 per order.